Day twelve: Dark Side of The Tune 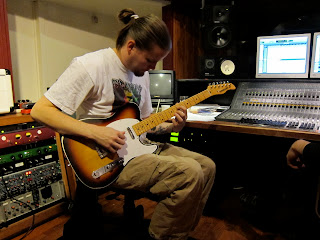 Friday: Italian open faced oven baked pie with toppings of choice. Oh...and guitars to shake your booty to and smoke 'em if you got 'em.

A ridiculously long, but hopefully descriptive intro to the procedings of this fair day inside the walls of Sound Supreme.
I got up at about eleven and found our producer Janne Saksa hard at work behind the Pro Tools console. I soon excused myself from his audio potential prescence as there are many things that are best left to the professionals. He was making vocal edits and trying to figure out ways to make the vocals sound sweet and brutal at the same time. You know, like a sugar coated sledgehammer.
I dazed back in to the lounge that serves as our living quarters and found the rest of the lads sleeping. Not wanting to disturb any one I go some quality listening time with Pink Floyd running through the headphones. Served well for later on today. Read on. 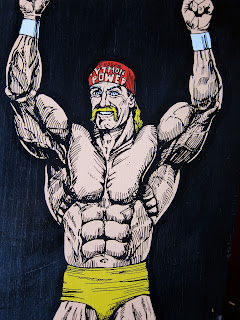 Once the house had awoken we headed in to the recording room and got down to laying my guitar tracks to a song under the name of "Same Difference". A full blast rock tune that is equal parts Prince, vintage thrash and shamelessly 80's influenced rock. Janne busted my balls rightfully on this one, for the intention, ladies and gentlemen, is to bring you nothing but the grooviest heavy guitar on this one. For those inclined to care about such things: I used a Washburn N4 Vintage through a white Marshall Randy Rhoads amp and some Mesa MK III, thrown in for measure. And I do believe I wore purple underwear, which obviously makes all the difference when you want to go for that gut bucket soul wrenching chucka-chucka vibe!
Friday is pizza day so the four of us headed to town to a pizzeria that Amoral has frequented every time while recording in Hämeenlinna. It is strange to note that there is another pizza joint immediately on the opposite side of the two lane street, but in a time span of 10 years no comparision between taste and quality have apparrently been made. Oh well, I guess you got to stick to your guns if you found a good one. Besides there's enough A-B testing going on in the studio, so explorations in to the potential quality differences between Turk operated Italian feederies are not the order of the day. 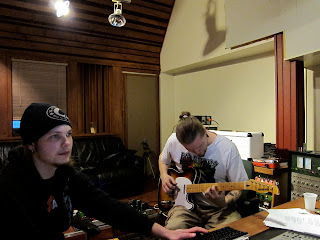 Back in the studio we tackle the guitar parts to what looks to be the ending song to the album. I dont want to give away details, as this one truly needs to be experienced. I will however reveal that listening to Pink Floyd served the recording of this song.
Tomorrow: More guitars!
Catch you later.
- Masi
Lähettänyt Ben klo 15.24