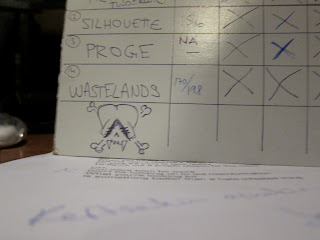 Today was all 'bout them sweet harmonies. Well not all, but mostly. Janne was already mixing and editing our poor perfomances when I got up around 11am. We went through some last-minute touch-ups, more programming for the "industrial waltz", etc. I then listened through all the songs with headphones on, just to see if we're missing any guitar parts, or if I'd hear some spots for backing vocals. And sure enough I found little things here and there to do. Janne took a break at this time: he'd be back at 6pm for the nightshift. The mission: finalizing the vocals. We had a whole song of growling, a whole song of clean singing and lots of backups and harmonies to do. So let's get busy! 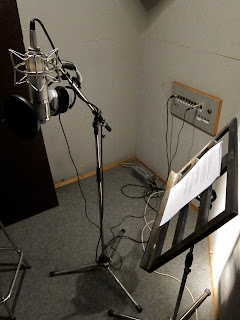 Singing some backups to Ari's leads was fun. I got to be the Richie to Ari's Jon Bon. The Jerry to Ari's Layne. The Ice Cube to Ari's Eazy-E. You get the idea. I handled the more punk rock parts (with my punk rock tuning!), and let Ari take care of all the creamy Boston/Chicago/Kansas -harmonies. There must be other brilliant AOR bands with stellar vocal harmonies that are named after American cities or states, but those three are the only ones I could think of right now.

It's 2.30am, and we just finished with Janne. Ari still has the growling song to do, and apparently he's about to go record them on his own now. I'm too sick (as in flu) and tired (as in tired) to join him, but he says he knows what he's doing. I guess first thing tomorrow morning me and Janne will have the exciting task of listening through Ari's 200 takes and pick up the best ones....