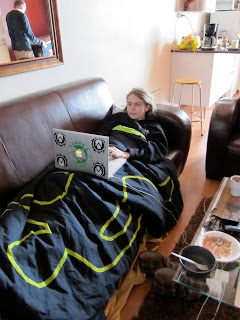 Have I succeeded on turning my sleep rhythm? That will be yet to see but at least I tried :) It's up to this night really, but hey, everyone has to suffer for this "art" we are making! That's how it is huh?


(Editor's note: no, Ari, you haven't. We had to drag your sorry ass out of bed after 3pm, so I wouldn't call that "turning your sleeping rhythm".)

When I woke up today Pexi and Masi were packing their belongings, leaving some weird stuff behind like some underwear and Masi almost forgot his cellphone as well. Well we all do forget things sometimes, some not so often and me very often. So they got all of their parts for the album ready and headed home to do some not so pleasant work but hey, it needs to be done I guess. That leaves Ben and myself alone in the studio and we miss the guys already, there is no one to make food for us! How could Pexi do this to us?!? We're fukken' starving! Ben seems to be texting to Pexi so maybe he'll jump on the last train and come make us some food.

Anyway, we recorded some backing vocals today, even Ben went to the vocal booth and gave us some smooth lower bax vox. With most of the tracks pretty much ready the album is starting to sound nice even when not mixed at all yet. Later we recorded a couple of additional guitar tracks where Ben tried to imitate my singing wearing those XL slippers for extra wah-wah pedal comfort. It looked like there was no pedal under those things. I say delete the vocals and let's make this an instrumental album with wah-wah guitars as the "lead-vocals", or what do you think? Well, maybe not... 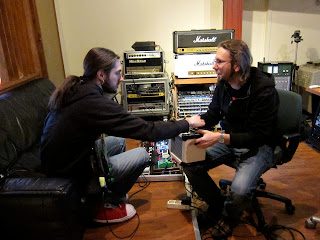 We just watched the most disruptive television-show, I can't even find words to describe it! I need to go wash my eyes with soap now, maybe that will help me to get some sleep too. Laterz!