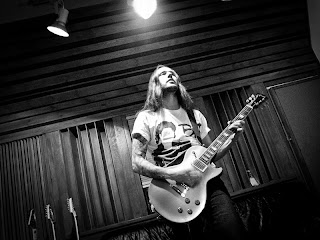 Woke up after just a few hours of sleep, tired as hell. Oh well, tough shit: Janne was already waiting in the control room, checking out the stuff we had recorded on our own during the weekend. So I drag myself out of bed, get a cup of coffee and go see what the producer thinks of the material. I'm glad to hear that most of it is worthy of keeping, only minor tuning issues (that nobody besides Janne and his golden set of ears would ever hear) are fixed. And then it's the moment I've been dreading: all rhythm tracks from my part are done, except for the fastest, hardest deathmetal-y tune I've been trying to avoid the past week. I'm not the most experienced seven-string player as it is, so trying to get the "way-to-fast-for-me", "million-notes-flying-by" riff  recorded properly gave me a lot of time to curse the day I wrote the damn tune... 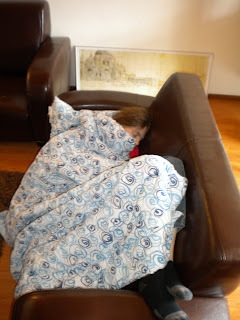 But hey, all my rhythm guitars are done! Now I can fully concentrate on leads, add-ons and "ear candy" guitar parts, as well as other minor things like finishing off the last set of lyrics and co-producing the vocals during my, Ari's and Janne's sensual late-night threesomes.

After office hours me and the guys visited the now legendary Poppa Joe second hand bookshop, where we stocked up on old Guitar World magazines, Pink Floyd vinyl singles and DVDs. Poppa Joe has provided this band with entertainment since the Decrowning sessions, and is yet to let us down. Big up!

Peksi helped me track a couple of leads later on, which also was a pain in the ass for some reason. Problems with the rhythm guitars, problems with the leads... I guess today just wasn't my day? Well, maybe tomorrow morning my fingers will be back on their A-game. And if not, I'll just let Masi "Reb Beach of Helsinki" Hukari play all the rest!

The 40 Year Old Virgin is on the TV, I'm restringing my acoustic and Ari is snatching some of Pexi's whisky while the bassist is practicing in the control room. Tomorrow we'll start searching for a divine bass sound, as well as starting to record Ari's vocals. Over and out!