I wake up around 1pm and see that Masi had tried to call me an hour earlier. Apparently the guitar slinger had locked himself out while we were all sleeping. That'll teach him not to go to the store without a key during small hours! He got in without too much hassle. Luckily breaking and entering is apparently not a crime in Hämeenlinna... 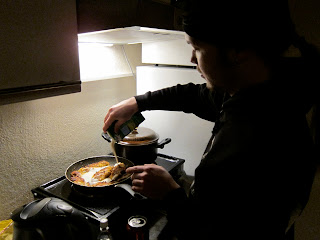 Me and Masi spent the day on solos and add-ons. Taking turns at dropping licks like the Tony McAlpines we are, we got a lot of bends, hammer-ons and taps down. The pinball machine kept Ari busy, and after recording bass until 9am last night Peksi had deserved his extra sleep. 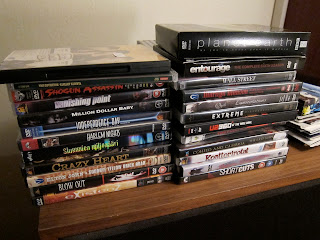 The guitar patrol is gonna be heading to Helsinki tonight for one day, meaning we're leaving the singer and the bassister alone in the studio for a while. A very scary thought, yes, but we're willing to take the risk. What we'll find recorded on the songs, spread in the living room or hidden under our pillows remains to be seen. The "plan" is that Pexi will nail the remains of his bass tracks while Arsba will get ready for mondays growling sessions, but I'm sure the guys will find more useful ways to spend their sunday.

We seem to be perfectly in schedule: all the rhyhm guitars are done, almost all the solos, acoustics and add-ons, over 50% of the vocals and most of the bass. And of course the drums. So we'll be able to concentrate on vocal harmonizing and last minute touch-ups next week.