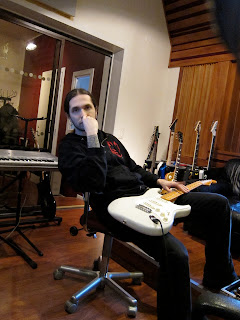 After a week of starting work at 9am, me and Julf gave ourselves the luxury of sleeping late today. It is saturday, after all. For Juffi this actually meant more work than usual, as Janne wasn't here to handle the first 8 hours of recording. But he engineered like a champ, whipping me until he was happy with the results.

We did some double tracking for songs recorded yesterday, and then tackled the behemoth that is "Beneath", a 9-minute sonic odyssey that might very well open the album. Just bursting with complicated rhythms and riffs, this song took a long-ass time to get right. it was a little after midnight when the second rhythm track was completed and we could call it a day. Though we rewarded ourselves by listening to some of the material we have recorded during the week: both just amazed at how good this sound with just some guitars and drums! If it's this good now, I might be afraid to listen to it once we're all done!

Valde will be popping by tomorrow, to see how we're doing. He'll be bringing along some mofos, namely Ari and Pexi, who we might end up using on this album as well... 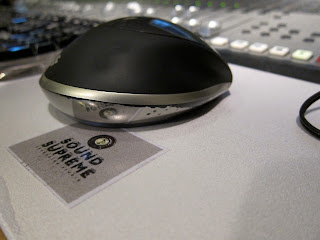 This was my last evening at the studio, and I celebrated it by drinking a couple more beers than yesterday. Kinda sad to leave, it has been nice to act like a producer and record guitar parts with Ben. But hey, I have a shitload of Shear & Tornado songs to rehearse in the next couple of weeks. And some academic commitments as well. Maybe I'll pop in after a week to see how things are progressing. I'm very happy that the drum-recording part went so smoothly and easily. Recording the guitars was also a nice experience. I just dig what we are doing here, simple as that. I hope Pexi, Ari and Masi will deliver some golden shit to the record because, not to boast or anything, we set the bar pretty high with Big Ben. I can't wait to hear the album after mixing & mastering, because we have some great stuff here guys, believe me!
-Juffi
Lähettänyt Ben klo 15.33