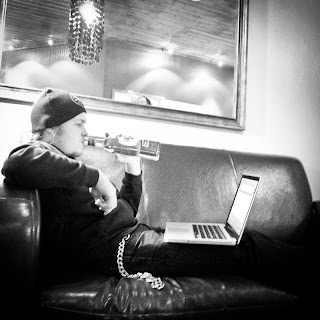 Howdy! Today we hit the studio with Ari. It's been just a quiet day at the office, checking out some cool stuff that the guys have done this week. Our guestarring producer Valtteri laid some additional guitars to one song (yeah, it's gonna be big hit). To my fresh ears the material sounds very promising indeed even with only drums and rhythm guitars on tape. Nothing special to tell you for today: right now Ari is playing the pinball machine (Royal Rumble baby, yeah!) I'm chilling out at sofa, listening Big Ben's playing in other room while drinking whiskey to get in the right mood for recording our next gold record, ha! Maybe after few shots I'm gonna show these mofos how to make platinum albums...
-Pexi 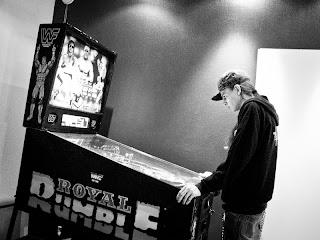 Today we had some lineup changes in this correctional facility of ours, with Juffi heading home and Peksi, Ari and Wally getting in. I decided to take it easy today, and focus on things I've been meaning to do for many days now, like going for a walk outside, a shower and some excercise. This magical combo did wonders, and for sure will help me get through the upcoming week. I also got a call from our merch dude Ilkka "näätä" Taponen, who will apparently be driving past the studio next saturday, so he'll drop by to give us the latest scene news from Helsinki. 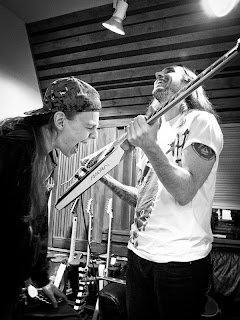 It hasn't been all fun and games though: after we finished our pizzas and the women in prison movie that went with them, it was time to grab the sexy Gold Top and lay down the first solo for the album. All three amigos worked as producing engineers, which was interesting to say the least: three different options after each take is a lot to handle. But it turned out cool.  I tried to insert some Juhani "DeadShapeFigure" Flinck -style facial expressions to my lead playing, and I think it actually helped make the licks a little more soulful! Thanks Juhis, luv ya man!