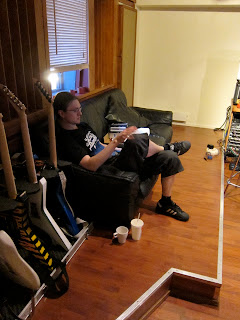 What's up peeps, it's Julf (aka Starvin Marvin) taking over! Feels nice to be in Hämeenlinna once again, so many good memories from this place.
Janne came to the studio in the morning to set up mic's for the drumkit, and pretty quickly we were ready to do a soundcheck. I had changed the heads and tuned the drums last night, and obviously did a good job since everything sounded killer right away. Actually we didn't change the tunings at all, just added some dampening here and there. Just a tad. This is my first time recording with the Pearl Ultracast snare, and man does it sound good!!! I thought Janne had added a sample or something to the sound because it was so great, but no it was just the drum itself. I'm using the 13" wooden Reference as a secondary snare this time, so that I have two different snare sounds in a couple of songs. The rest of the kit is the same Pearl Reference setup that I've recorded the two last Amoral albums and the Shear EP with. Needless to say, it sounds great! Cymbals are all Sabian like last time as well (AAX -series), the only difference is that I have a little bigger crashes now (two 18" and one 17"). 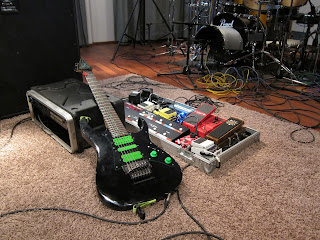 So yeah, since it only took a couple of hours to find a good sound we could start recording pretty early. The result is 6 recorded songs in the first day. Not too bad, eh? This kinda reminds me of the Decrowning session (it took 1,5 days to record drums on that one). Ben provided the right vibe and punk-rock attitude by playing guitar while I was recording. It's funny how big difference it makes to the feeling when you're not playing the songs alone in the recording room. 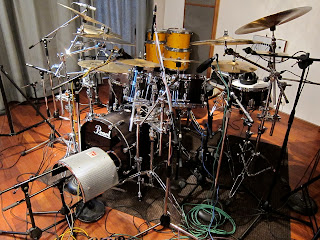 I'm more than satisfied with today's results. We have a killer drum sound and 6 recorded songs already! We were aiming for 4 songs in the first day, so things are going way smoother than expected. Janne went home so now it's time to relax and maybe jam some songs with Ben. I'll get back to you tomorrow, peace out!
-Juhana
Lähettänyt Ben klo 9.21 2 kommenttia: 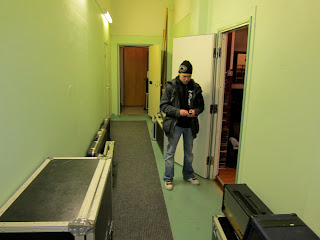 And here we are! Me & Juffi were dropped off to Hämeenlinna with our gear by Pexi, which was nice. Janne was waiting at the studio to welcome us and show us how to work the new pinball machine (Royal Rumble baby!). Some quick catching up and working out the schedules before it was time for Janne to go home and for Pexi to head back to Helsinki.  And for me and Julf to start setting up the gear for tomorrow. He's in the recording room right now, stretching out new skins for the drums, so that beautiful Pearl Reference kit of his is ready for work first thing tomorrow morning. 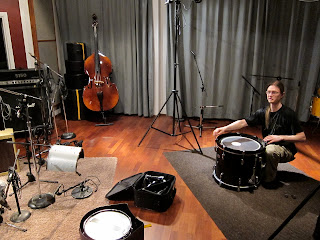 My role here (other than being the neurotic bandleader who has to be present for every step of the way) is to play along with Juffi when recording the drums, to get at least a little of that jamming/live feel for the takes. Our goal is to get 4-5 tracks done per day, meaning the drums will all be done in three days. But let's see how much hassle tomorrow will bring with the miking, sound searching etc.

On our way here we discussed a little bit about our "A and B lists" of songs, meaning tracks we are 100% sure that will end up on the album, and tunes that might not make it on there. We honestly have no idea yet what the final track list is gonna look like, which actually makes this pretty exciting...

Ok, back to setting up gear. We'll get Juffi up here tomorrow to give you a rundown on day one. 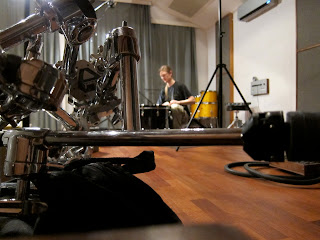 Two more days until it's time to once again pack all our (plus loaner!) gear into the van and head towards Hämeenlinna, to record the 5th Amoral album. I love the whole process of album making. From strumming a guitar by myself at home, coming up with riffs and melodies, to showing them to Juffi and trying out some drum beats together, to writing the lyrics, to getting to hear them sung by Ari for the first time, to playing the new songs together with the whole band, to fine-tuning the songs with little cool ideas and arrangemets, to setting up camp at the studio for a month, trying out different sounds, listening to different takes, trying out different guitars, listening to Producer Saksa's brilliant ideas for the songs, getting it all on tape, getting rough mixes into the mail box one by one, working on the artwork, listening to the final master and finally getting a copy of the pressed album into your hands. We're talking of a time period of about two years here, from first riffs to final product. And it's all good!

The plan is to get to Sound Supreme Studios, Hämeenlinna (about an hours drive outside of Helsinki) sunday night, so me and Juffi can set up everything for monday morning. First week will be mostly dedicated to drums, though I highly doubt that Starvin Marvin will need more than three days to track the 14 songs we're gonna record. I will be staying at the studio for pretty much the whole month, while the other guys will pop in for different time periods.